In our Bitcoin Broker & Exchanges Comparison you will find information and tests about the largest and best brokers for trading cryptocurrencies such as Bitcoin, Ethereum, ZCash, Monero, Dash, Litecoin and many more, who also offer trading of these digital currencies to German investors.

In addition, almost every broker or exchange has customer reviews and trader experience that can help you choose the best broker for Bitcoins. So you can quickly and easily find the best broker for buying Bitcoins or other cryptocurrencies for your needs.

A new trend on the financial market, which is not so new anymore, but is currently receiving a lot of attention, is the so-called crypto coins. These are digital currencies, the Cryptocurrencies with which consumers can pay on the one hand, but which are on the other hand mainly used for speculation.

Apart from Bitcoins, which can now be used to pay in various online shops and in some cases even in local shops, most alternative Bitcoins have so far been used almost exclusively for speculation.

There are various ways in which and where interested speculators can use cryptocoins to take advantage of rising countervalues (prices). The following article therefore deals with Cryptocurrencies, how and where they can be traded and what you should know about a Bitcoin and Crypto Broker comparison.

Before we go into more detail about how and where you can trade cryptocurrencies and which of these coins are currently in demand and known, we would like to inform you a little bit more about the background. What are cryptocurrencies actually? Crypto coins are digital currencies that work with a certain encryption technology and basically work on the basis of cryptography.

The key feature of cryptocoins is that they function completely independently of banks, which is a striking feature and at the same time a decisive difference to the so-called central bank money, which we know as classic cash or account deposits.

The transfer of cryptocoins, on the other hand, works similarly to a transfer from one bank account to another. In this case, however, it is not necessary to have a normal current account or securities account, but a so-called wallet instead.

This is a type of electronic account that is used exclusively for the management of the cryptocoins. The whole system works with a private and public key. In principle, you can compare the public key with an account number that you know from your current account, for example.

The public key is quasi the receiving address to which cryptocoins are sent by other people and from which you can also send cryptocurrencies to other recipients. The private key, on the other hand, is comparable to the secret code in online banking, so you should keep it secret. The private key is needed to confirm a transaction in the cryptocoin area.

How does Cryptocurrrency Trading work?

The wallet is the basis for you to send and receive cryptocoins at all. However, it is only used for safekeeping and booking the coins, but not for speculation. Therefore, if you wish to speculate on the performance of individual cryptocoins, you will need a different access, similar to the one you have when speculating with commodities or other financial products. Currently, there are two main ways in which you can buy cryptocoins or speculate on the price development, namely

These two ways and methods by which you can buy and sell cryptocurrencies and speculate with the crypto coins are explained in more detail below. 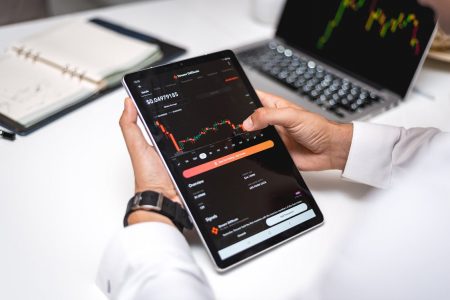 Perhaps the easiest way to speculate on the price development of cryptocoins is offered by some Forex or CFD brokers. This is especially true if you are already speculating on currency pairs or CFDs on shares, commodities or other financial products and therefore already have a trading account with such a broker. More and more CFD brokers are going over to offering CFDs on cryptocoins.

Currently, the following Forex or CFD brokers are among the service providers who also offer Cryptocurrencies (Crypto-CFDs):

If you choose this way of speculating on Cryptocurrencies, trading will work the same way as if you choose for example for stock or commodity CFDs. This means that you buy using the Contract For Difference cryptocoin, although of course in this case you can also benefit from the leverage provided by the CFD broker. As with all other CFD types, Crypto CFDs also give you the opportunity to speculate on both rising prices and falling prices of the respective Coins.

In one of the following sections we will present a short portrait of the cryptocurrencies mentioned above.

Speculating on the price development of individual cryptocoins via CFDs with a Forex or CFD broker is one possibility. However, there is another option for trading with cryptocoins, namely via so-called special exchanges. These are special cryptocoins exchanges where you can buy and sell coins in one transaction.

There are an increasing number of these Bitcoin Brokers & Exchanges on the market, for example

The main difference between trading cryptocoins via these exchanges and the CFD trading described above is that there is no leverage in buying or selling the coins via the Exchanges that would increase your potential profit – and of course a potential loss.

You buy and sell the cryptocoins via the Exchanges in a 1:1 ratio, but before you can trade Bitcoins or one of the numerous alternative cryptocurrencies via these exchanges, you need the wallet mentioned above. This is used to book incoming coins and you can also send cryptocurrencies to other recipients in return.

Bitcoin and Crypto Brokers in Comparison

The previously mentioned CFD and Forex brokers, through which you can trade cryptocurrencies via CFDs, are now also called crypto brokers. So if you want to carry out a Bitcoin or Crypto-Broker comparison, you should include those CFD and Forex brokers in the comparison who now offer trading with Crypto-CFDs. After all, the aim is to find the best provider for you, through whom you can at least trade in Cryptocurrencies or speculate on the development of crypto coins.

The choice of the provider will certainly also depend on whether you wish to speculate with other financial products in addition to cryptocoins, such as commodity or equity CFDs, or whether you wish to concentrate exclusively on cryptocoins. If the latter is the case, a Crypto-Broker or CFD-Broker who offers at least several Cryptocurrencies is the best choice. Basically you should pay attention to some aspects when comparing the brokers. For example, the following properties and characteristics play a role:

A particularly important point in the previous enumeration is certainly the user-friendliness of the respective platform or trading interface. Here it is important that you can find your way around easily and, for example, can see at first glance which cryptocoins you can buy or sell. But also a good accessibility of the customer service, ideally in German, can be an important aspect, especially in case of questions and problems.

Which Cryptocurrencies can you currently trade? 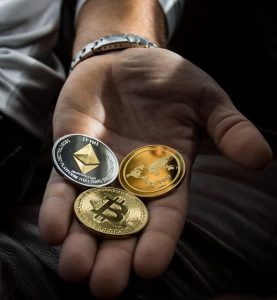 As already briefly mentioned in our article, there are now over 800 different cryptocoins available. However, only a small part of these more than 800 coins can be traded via a few CFD or Forex brokers.

Although the choice is somewhat greater at the Exchanges, the range is usually limited to a maximum of 50 to 80 coins. So if you want to speculate on the price development of certain cryptocoins or trade with the coins, it is a good idea to stick to the best known cryptocurrencies with the largest market capitalisation. We would like to briefly portray six of the best-known cryptocoins, which we have already listed before, in the following.

In order to save money you can check out this coupon website where current discounts and offers are listed.

BitcoinThe Bitcoin was the first cryptocurrency ever and was launched in 2008. The price development was gigantic within the last nine years. While in the early days a Bitcoin had an equivalent value of less than a cent, today you have to pay over 1,800 euros for a Bitcoin. Bitcoin still has by far the largest market capitalisation and is almost the only coin that is now accepted in some online shops and even in some local shops.

LitecoinThe Litecoin is also one of the established cryptocurrencies and was launched six years ago (2011). Technically the Litecoin is almost identical to the well-known Bitcoin system. A major difference to Bitcoin, however, is that transaction confirmations are much faster. In the Litecoin network, the blocks are generated every 150 seconds, while the frequency in the Bitcoin area is around ten minutes.

EthereumEthereum is now the cryptocoin with the largest market capitalisation after Bitcoin. Insiders even argue that Ethereum has the potential to enter the bitcoin sector in terms of the value of the coin. However, there is now a differentiation between Ethereum and Ethereum Classic, which is due to a technical distinction made in the past. The beginning of the cryptocurrency can be traced back to the year 2015, even though Ethereum was first described at the end of 2013.

ZCashZcash is a relatively new cryptocurrency that was launched only last year. A key feature of Zcash is that it uses a new type of cryptography and zero-perception credentials. This allows to protect not only the amount, but also the recipient of secured transactions.

RippleRipple is an open source protocol, which has the advantage, among other things, that the network supports any currency. The basis for Ripple is a public database containing a register of account balances. Due to the transactions that can be made, Ripple is of course also one of the Cryptocurrencies.

The decentralised account currency Monero appeared in 2014 and is now one of the leading cryptocurrencies with a market capitalisation of more than USD 725 million. A major difference between Monero and the well-known Bitcoins is the greater focus on anonymity and decentralisation. In addition, there is a different approach to the Bitcoins in terms of the scalability of the coins.

Conclusion on the Bitcoin and Crypto Broker Comparison

Cryptocurrencies are currently a big topic in the field of finance, and more and more private persons are interested in them. Speculation on the price development of the coins is mainly possible via certain CFD and Forex brokers, which offer several cryptocurrencies and are therefore also considered crypto brokers.

Alternatively, the option is also available to trade the cryptocoins via a special exchange, such as Kraken.com. The cryptocurrencies will definitely be a topic in the coming months and years as well and perhaps help clever speculators to make enormous profits, as the example of Bitcoins has already shown in the past.